Its answer time again. Though there were fewer responses this week, the mailbox was kept busy by the regulars who seem to have developed a liking to the quiz.

Thank you all for dropping by with words of encouragement.

For the second week in succession, Anukriti Pandey secures a podium finish and giving her company is another Pandey, Amit Pandey from Mumbai.

Time for the answers now.

1. It was first founded by the California clothing company Pacific Mills to showcase its Catalina swimwear brand. Later, it became a part of Kayser-Roth and then Gulf and Western Industries. In 1996 the ownership was taken over by Donald Trump. What are we talking about ? (Hint: Current Affairs)

2. Established in 1970, it is one of the leading Business groups in the Middle East. In its initial years it dealt primarily in the sale and manufacturing of gold products. Over the past 34 years, it has grown into a multinational company and has interests in Manufacturing, Refineries and the Media. The company bears the name of its founder. Name the company.

3. Which newspaper in India once advertised itself with the following tagline - "No one but us to break the records, it’s a lonesome feeling. Ask Bubka."

4. In the blogging world, what is a Blogsnob ?

Ans: A person who refuses to respond to comments on their blog from people outside their circle of friends.

5. Which company listed on the New York Stock Exchange has the initials of a famous composer as its ticker symbol ? Name the company and the music composer.

6.1 This father son is one of the most popular pairs in the "Indian Entertainment Industry". Name them and their profession. 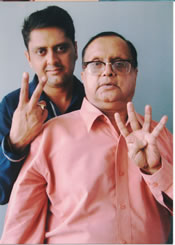 6.2 What is the significance of this photograph to the world of Internet ? 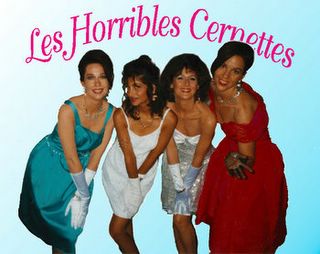 Ans: This was the first photo to appear on the Internet.

6.3 Name the event being advertised here. 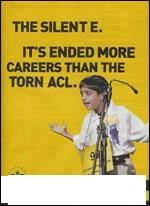 Ans: 2005 Scripps National Spelling Bee Contest (Anurag Kashyap being the winner this time. His winning word - appoggiatura which means an embellishing note, usually one step above or below the note it precedes and indicated by a small note or special sign.)

The long weekend hangover is yet to recede. And that is the reason why posting Round 15 of the Jaldi Quiz is held up as of now. Will post it soon.

In the meantime, here are the answers to the Questions for Round 14.

Congratulations are due to two regulars of the Jaldi Quiz - Yashasvi Arun and Anukriti Pandey.

They have come up with the top scores in this round.

As always, keep the responses and suggestions flowing.

1. The logo of this production company is the only one to change after every telecast of their television show. Their "latest" logo was that of a plate with a check that had the words "No Charge" written on it. Name the production company and the famous show being talked about ?

Ans: The "Where's Lunch" logo. Their production - Everybody Loves Raymond.

3. The United Eco Action Fund (UNECO) runs a school in war torn Liberia. Who is this school especially run for ?

5. The underarm delivery is one of the infamous incidents in International cricket. Very recently, another bowler pretended to do the same but was "red carded" by the umpire. Who is the person in question ?

The Star Wars Round:

1. The Star Wars Universe has its own dating system or calendar where events are referred in either BBY or ABY. What do BBY and ABY stand for ?

2. Very Very Easy One. The Star Wars fight sequences are characterised by the use of this weapon. This is the weapon of the Jedi which when deactivated appears as a polished metallic handle, about 30 centimeters long, lined with control studs. What is the name of this weapon ?

3. Which work of Joseph Campbell serves as an inspiration to both Star Wars and the Matrix ?

Ans: The Hero with a Thousand Faces.

4. Another easy one, which Star Wars creature is able to understand the galactic language "Basic" but communicates in his own language "Shyriiwook" due to a vocal defect ?

5. The name Yoda is derived from the Sanskrit word "Yoddha". But who was the original Yoda sculpted to look like ?

The 6th Star Wars question: What is George Lucas's next project called ?

Ans: Reebok and Bank of America.

6.2 This chef was in the news recently for quitting his present job. He shot to fame during his company's IPO when he was presented to the investors as the company's CFO (Chief Food Officer). Identify him and his erstwhile company. 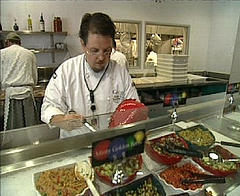 6.3 Identify the person recently in the news promoting vegetarianism in this advertisement. 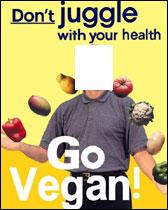 Responses to this quiz really packed my inbox throughout the week. It feels nice to interact with quizzers with varied tastes and interests from all over.

This week saw not one but two people who came out with the maximum correct entries.

Congratulations are due to Amit Pandeya, the seasoned Biz Quizzer from Mumbai and to Bharat Choragudi.

Infact, Amit was the only one who came quite close to answering the fourth visual.

Without further ado, here are the Answers:

1. The French have a strong aversion to English terms. They seem to be coining words in French and are putting them to official use. The Académie Française came up with words related to the Cyber world like ARROSAGE, BOGUE and COURRIEL. How do we better know these terms ?

2. The literal meaning in Chinese for this term is - "Ten-Thousand-Dimensional Web in Heaven and Net on Earth". How do we better know this yet another term from the Cyber world ?

3. Easy One. In the 1930s, the representatives of Western democracies attending the Mostra di Venezia were shocked by the influence of the fascist governments of Italy and Germany on the selection of films and the decisions of the jury. What resulted ?

4. This was a brief from the agency to the musician - "We want a piece of music that is inspiring, universal, blah-blah, da-da-da, optimistic, futuristic, sentimental, emotional," this whole list of adjectives, and then at the bottom it said "and it must be 3 1/4 seconds long." The musician's name at birth was Brian Peter George. How do we know him better and identify the piece he created ?

5. The Maharashtra State Commission for Women in the year 2002 instituted the ‘Duryodhan Award’ and the ‘Rakshasha Award’. The winners that year were Amdani Atthani Kharcha Rupaiyya and Aks respectively. What are these awards meant to (dis)honour ?

6.1 Both these logos are pretty well known. Identify them.

Ans: AT & T and Minolta (known as Konica Minolta after its merger with Konica.)

6.2 This is the logo of a Foundation located in Tampa, Florida dedicated to assisting charitable and educational causes in the West Central Florida region. The Pirates Flag is synoymous with the Tampa Bay Buccaneers. However the person behind the Foundation and the Buccaneers is creating a storm and is the reason for protest elsewhere. Whom are we talking about ? 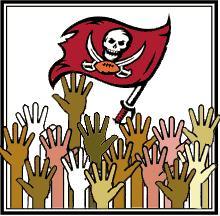 Ans: Malcolm Glazer who now has control of Manchester United.

6.3 Easy one. Kanan Dairy Products located in Illinois,USA is the sole importer of what to the USA ?

6.4 He was a person in the news recently. He belongs to the film fraternity but is not an actor or a director . Identify him and his claim to fame.

Ans: The only unanswered question. He is Manoj Desai, the owner of the Maratha Mandir theatre where DDLJ (Dilwale Dulhania Le Jaayenge) completed 500 weeks. He also is the executive director of the G-7 theaters in Bandra,Mumbai. Infact, he produced the Amitabh Bachchan - Sridevi starrer Khuda Gawah and is the Chairman of the Amitabh Bachchan Fan Club.

The 12th Round saw answers pouring in from various corners of the globe. But it was Shovon Chakraborty who came out with the maximum correct answers.

1. An international Airline company called PB Air has been granted permission by the Indian Govt. to begin bi-weekly International Charter Flights between Bangkok and an Indian destination from December 2005. Name the Indian City.

2. Which greats of the Music World were known as Tom and Jerry in their early days ?

3. A High School in Pakistan is to be named after an Indian Prime Minister. Name the Prime Minister in question and also the place where this school is located?

Ans: Manmohan Singh. The village is Gah in Punjab, Pakistan.

4. Connect Montpelier, the capital of the US state of Vermont with the fast food chain - McDonalds ?

Ans: Only US State Capital without a McDonalds outlet.

5. A sitter. Someone who featured in a commemorative postage stamp in 1988 has recently been named the Brand Ambassador of an airline company. Name the figure and the Airline company.

6.1 This ship built in Mumbai was used extensively during the IPKF operations in Sri Lanka. It has been in service for over 30 years now and shares its name with a very famous Indian ruler. Name the ship.

(I was always fascinated with the shape of its chimney which is quite unlike the other ships).

6.2 Identify this person from the Indian film fraternity who has been in the news recently. (Hint: He is not Shahid Kapoor.)

6.3 Both these persons have been the President of a Middle East Asian country. They were succeeded and preceeded respectively by someone who needs no introduction the world over. Whom are we talking about ? 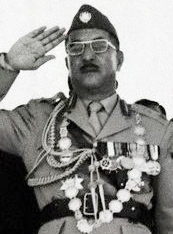 Well, for most of us who have been bitten by the Quizzing bug, its always a question of Us versus They (They - who ?? those who consider Quizzing to be a sheer waste of almost everything)

Chanced upon this interesting article on a Blog maintained by Tadatmya Vaishnav where he brings out all that the non Quizzing world has to say.

But Tadatmya, the quizophile that he is, rebuts in a blow by blow account and stands in defence of quizzing.

Do read this two part article:

Update: Almost 500 hits in a matter of 3 days since the last post. Quizophrenics have dropped in from far and wide. From quizzers in Pakistan to the Trinidad and Tobago, a warm welcome to all.

Its Answer time for Round 11. Congratulations to Rakesh Tiklekar who had the maximum correct responses.

Thank you all for your words of encouragement.

1. The Metropolitan Motor Works was a short lived venture. It was started by an eminent Indian for his son. Though the father reached the pinnacle in his field, the son was a mostly unknown entity. Name this father-son duo.

2. An easy one. This album features nine film and Indipop tracks. One of them though critically ridiculed has really caught the attention of the people and has gone on to become quite a rage in India. The track has music by Vishal-Shekhar and vocals by Sudesh Bhosle among others. Name the album.

3. Ganga Dham is a proposed spiritual theme park at Haridwar.It is an “Edutainment / Infotainment” project that will promote, in an entertaining fashion, the diverse cultural, mythological and religious heritage of India. Who are the promoters of this group ?

4. Another easy one. At school, he formed a stick-ball team called the Nads (providing him and his pals with a chance to shout “Go Nads”). At Yale, he was famous for doing the alligator, a dance that involved falling on the floor and rolling around.At Harvard Business School, he wore cowboy boots and chewed tobacco. Whom are we talking about ? 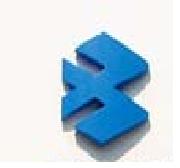 6.2 Identify this logo which looks quite similar to the previous one.

6.3 Identify the institution to which this logo belongs.

6.4 The lady's name is Halina Kwiatkowska. She made it to the newspapers in the month of April. What is her claim to fame ? 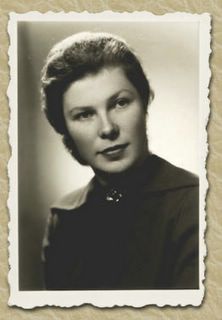