A few days back, I was woken up from my slumber by a couple of mails.

My good friend from Hong Kong, Anshuman Das who is singularly responsible for this blog seeing the light of the day, enquired as to when the 25th edition was coming up.

The other, from Murali Duggineni, the man behind the popular Business Quiz group - Quinkie. His mail was an eye opener to the plagiarism that has hit Quizzing in India.

As I get back to some activity on the blog, let me begin by reproducing one of his mails that he had sent me.

And to Anshuman and everyone else who have been by this blog's side, the Silver Jubilee post is just a few days away.

The Strategist Quiz link is here.

In my earlier mail, I wrote to you about the plagiarism in Business Standard quizzes. When I brought this to the notice of the Editor, she wrote back informing me that she would take action. I have no clue about what action she has taken. I think now it's our turn to see that parasites like Bindra do not flourish at the expense of good quizzers. In the latest quiz in Business Standard (dated 30 Aug 2005), you can see some of your questions. You can see some of your questions.

Let's come forward to make Business Stanadard and Bindra pay a heavy price for what they have been doing for years.

1. Jack Welch is one of several prominent people who have appeared on this three-minute snippet where celebrity-achievers share their concept of management with viewers. The programme, which appears on a business channel, is called Moments of inspiration. Which brand sponsors this programme?

2. This company had to change its earlier name due to infringement of rights on the name and adopted its new name by mixing an old French word with a Greek one meaning "beam of lights from the Gods". What is its present name?

3. His passions are Guinness beer and pistol shooting, but "not mixing them together". And his middle name is Benedict. Who is this software genius?

4. Traces of benzene found in this product in 1990 in the US forced the brand to withdraw millions of bottles from the market in the US and Europe. Which brand?

5. PB Air has been granted permission by the Indian government to begin bi-weekly international charter flights in December 2005, between Bangkok and which Indian city?

(refer to question 1 in Answers to Round 12; original contributor: Aniruddha Dutta)

6. What is the connection between Montpelier, Vermont, and McDonald's?

Source: http://adquiz.blogspot.com/ and http://groups.yahoo.com/group/quinkie/message/1677 (refer to question 4 in answers to Round 12; Original Contributor: Aniruddha Dutta)

7. What is the common link between the lion, palm tree and Hilton Young?

8. Who said, "In the business world, the rearview mirror is always clearer than the windshield"?

9. What is a bond issued by an insurance company, linking principal and interest to the company's losses due to natural disasters, called?

10. On January 17, 2002, Yusuf Ratlamwala received two cheques from Bank of Baroda. What was special about them?

Playing the second fiddle, it has definitely been quite a long time since I contributed to this Quiz Blog. Anyways was quite busy conducting a few School level Quizzes - one at Shishya School and the other at Hindu Senior, Indira Nagar both in Chennai.

And frankly was quite amazed with the reservoir of knowledge and Trivia the youngsters of the day possess.

Most of the Questions have been compiled from the Quizzing Groups like Quinkie and IBQ. Acknowledgement is due to Sudip Kumar Roy whose BizConnect series has been my biggest source.

Answer Time it is.

Amresh Kumar yet again comes up with a superlative performance.

When everyone else failed to connect Anil Ambani with the "queen", it was Amresh who mailed in the Correct connection.

Rakesh Taklikar and Sampreeth Kumar came in a close second.

As always, keep your suggestions, comments and responses flowing at aniruddhadutta@gmail.com.

1. The author's preferred title for this book was "Four-and-a-Half Years Of Struggle Against Lies, Stupidity And Cowardice" but the publisher thought otherwise. In its first year in 1925, this book sold only 9000 copies. However in another 8 years time, the book sold an estimated 1.5 million copies. Name the book and its author.

2. Easy one, why is the company, Global Fuel Management Services in the news recently ?

Ans: It is one of the companies which have been formed as a part of the Reliance de-merger. Is a part of the Anil Dhirubhai Ambani Enterprises (ADA) Group.

3. Where would you come across this verse -

When Ivo goes back with the urn, the urn;

The welkin will ring loud,

The great crowd will feel proud, Seeing Barlow and Bates with the urn, the urn;

And the rest coming home with the urn.

4. The beginnings of this company can be traced back to 1895. The company was then called J.W. Foster and Sons . It rose to fame after the 1924 Olympics and the film Chariots of Fire. The company was in the headlines last week. Name it.

5. Which television show gets its name from a 1956 Cole Porter song which featured in the soundtrack of the Hollywood movie High Society ?

Ans: Who Wants To Be A Millionaire. 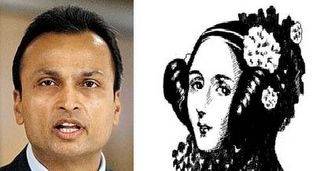 Ans: Adidas buying out Reebok - Reebok gets its name from the African antelope - Rhebok. The logo to the left is Adidas'. 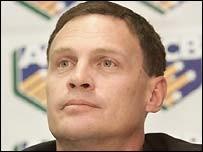 Till now, a Silver Jubilee was what I associated with Wedding anniversaries or films from the Big B , Shah Rukh Khan or the Chopras. Seeing a self creation turning 25 would be in itself a wonderful feeling, I guess.

Anyway, the world over, rains seem to have subsided and as life picks up and moves on, I guess Mumbai now has enough newspapers for its people to follow.

After the Hindustan Times, it is the Daily News and Analysis (DNA) which has hit the news stands.

Elsewhere, in the telly world, Kaun Banega Crorepati, the show which resurrected Amitabh's career is back for its second innings. This is the show that took quizzing to the pan-wallah and though a seasoned quizzer may have different opinions, no one can get away from the lure of the big bucks.

I still remember waking up in the middle of the night and trying the numbers only to find my fingers going numb after some time.

On the cricket field, the Prince is now a commoner. Whether or not he gets the crown back is another matter. But if Team India needs to have a better season, all its top guns should start firing pretty soon or else the Indian Oil Cup would continue to remain south of the Palk Strait.