Yesterday, a good part of the day was spent in South Mumbai. Staying in the northern suburbs, my daily journey ends up at Andheri in Mumbai where work takes me.

So, after close to 2 months, when I got the oppurtunity, I got up early after staying up really late in the night to finish off office work.

A few quizzers had come up with idea of The Bombay Quiz Club. And I surely wanted to check in. The Tea Center in Churchgate was the venue. In attendance were 5 more souls.

Though I finished last in the Quiz that followed, the experience was quite enriching.

So, in case you are from Mumbai and want to know more, do visit the Bombay Quiz Club Blog.

And here are the Set of Questions that I carried for the Meet.

PS: Folks not conversant with places in Mumbai - Apologies. Probably this might help.

Mail your answers to: aniruddhadutta@gmail.com

1. What is so official/significant about the phrase - "The razor-toothed piranhas of the genera Serrasalmus and Pygocentrus are the most ferocious freshwater fish in the world. In reality they seldom attack a human."

2. English architect FW Stevens was the man behind the Victoria Terminus building. His son Charles Stevens designed another famous landmark in Mumbai. Which one?

3. Connect the Beatles to an accidental activity at the hands of Marie Ana Smith from Australia in 1865.

4. In which country is food made at a McDonalds outlet used as reward for prisoners?

5. Easy one, What was introduced by the Indian Government bearing code XPGR with the Reserve bank of India (Amendment) Act on May 1st,1959.

6. Another Mumbai landmark. Erected in 1864 by the Agri Horticultural Society of Western India out of a donation of Rs.20000 by Cursetjee Fardoonjee Parekh, it is sculpted in imported Portland stone. It was originally to be named after Sir Bartle Frere, the then governor of Bombay.

7. What did an advertising man Harvey R Ball design for the State Mutual Life Assurance Company of Worcester, Massachusetts in 1963 for a fee of $45? The brief given was to come up with something cheerful to smooth wrinkled brows and make the whole merger process which the company was contemplating a little more bearable for everyone.

8. Named in honor of Sir Appleby, the civil servant in Yes Minister, whose recent passing away led to this tribute from The Times - Political World Mourns a killer named _____".

9. When does a British Member of Parliament apply to the King / Queen for the post of the "steward of the Chiltren Hundreds" or the "Steward of the Manor of Northstead"?

Though I have not gone ahead and verified this fact, the event does see participation from almost every Corporate House in the country.

On the 20th of March 2006, when the BEQ Bandwagon came to Mumbai, I left early from office and arrived at the St. Andrews Auditorium in Bandra. Being a bit of a pessimist myself, all I thought is that I will be coming back with a few Gift coupons or T- Shirts.

But at 9:00 PM, when I was trying to get into a second class compartment of the Borivali slow train at Bandra, I realized that I had something heavier to carry back.

Prior to that, Mr. M. Suresh Kumar, my partner, who earned the distinction of becoming the oldest ever participant on stage in the history of the Quiz and yours truly went past 70 odd teams to come Second Best.

It was another thing that after every round, all that I was doing was picking my bag and getting all set to walk off the stage.

Maybe next time, I would have another story to tell. 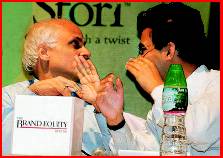