Congratulations to Mr. V. Raja from Mumbai who sent in an all correct response.

A few of you suggested that the answers be posted after the questions. So scroll down and see how many of them you got.

1. The membership of this club is fixed at 7000. Any death or non-renewal of membership for two years vacant a place for a new member. There are two kinds of memberships that are currently being offered to the people - Ordinary / Tennis membership and Life Membership. The Annual Membership fees are Rs.3000 (Registration Fee) and Rs.261 (Annual Fee). For a Life Membership, you need to pay Rs. 12250 (Registration Fee) and Rs. 3 (Annual Subscription Fee). Which club are we talking about ? (Hint: This club is currently in the doldrums.)

2. What are Bubble Range, Gold Crown, Ridgeback Series and Kahuna Range types of ? (In the news)

3. Why is the dialect Ku from the African republic of Matobo in the news recently ? (Both the dialect and country are however imaginary)

4. Traf-O-Data , a company formed in 1972 developed a computer system for recording automobile traffic flow on a highway. It kept track of traffic from black hoses laid across the road. Who were the founders of this now defunct company ?

5. Who am I ? This one time talk of the town in India wanted to make it to the Civil Services. Eventually he did not. In his hey day he even modelled for a TV commercial. However at present, he is doing a one year MBA, specialising in marketing and public relations at Edinburgh University.

6. Here comes the Visual Round:

6.1 Identify this legendary footballer of yesteryears who even has a street named after him in Calcutta. 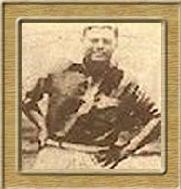 6.2 This is the logo of a company which is making the headlines in the Sporting world. Identify the company. 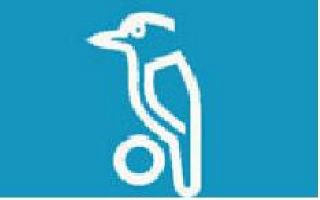 6.3 Pope John Paul II was the first pope of the Internet age. Here he is seen sending his first email in a much televised event. What was this "email" all about ? 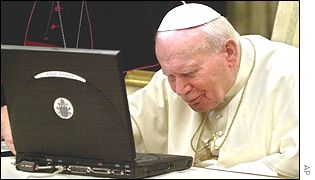 1. Mohun Bagan (Really sad to see the state of affairs of the club I still love. A relegation would surely hurt all who still care)

2. They are types of cricket bats made by the Kookaburra company.

5. Harshavardhan Navathe - India's first Crorepati from Kaun Banega Crorepati. (Well KBC also had a Couples round and a Junior KBC

6.3 The Pope apologised for the injustice committed by Roman Catholic Clergy in the Pacific Island Nations.

Here are the answers to Jaldi Quiz - Round 9.

Congratulations to Yashavi Arun. His was the response with the maximum correct answers.

1. What unique achievement connects Bjørnstjerne Bjørnson of Norway and Rabindranath Tagore of India ?

Ans: The art of balancing the hot and cold water taps of the shower. (Yes, this is from "The Meaning of Liff")

Ans: Tata Young - the pop sensation from Thailand. Her middle name is Amita Marie and her website is managed by Tata Entertainment Company Limited.

4. With which brand would you associate Mahashay Ji ?

5. This company manufactures the products - Chintoo,Chox,Rangeeli and 4ever. Though not available in India, most of the people see their ads thanks mainly to their local cable wallah. Name the company.

Ans: Kidco - the company is based in Karachi, Pakistan. Its ads can be seen in the pirated movie CDs aired by the friendly neignbourhood cable wallah.

Here are the answers to the Round 8 of questions. The 6th question still remains answered. Anyone having any clue of the answer can reach me at the following id.

Mail your answers to: aniruddhadutta@gmail.com

1. What connects the following CEOs - Tim Taft of Pizza Inn, Eric Schmidt of Google and Steve Jobs of Apple ?

Ans: All these CEOs draw an annual salary of $1.

2. It is made of cotton and linen blend with red and blue silk fibers running through it. A special and unknown blend of ink is used for printing purposes. It is starched to make it water resistant and pressed for a nice crisp look. What is the item mentioned above ?

3. A property developer Sir Jack Hayward has a school named after him in the Bahamas. He is also the owner of the Wolverhampton Wanderers FC. But what has been his contribution to the world of cricket ?

Ans: He sponsored the first ever World Cup Cricket Tournament for Women.

Ans: All these players have a Highest Test score of 99.

5. What connects the clothing lines launched by Serena Williams and Bono of U2 ?

We all know that Kapil Dev's great knock of 175* against Zimbabwe in the 1983 World Cup was not captured on Video or was not telecast since BBC went to strike on that day. The Question is: What were the employees of the BBC striking against on that day ??

Ans: They are the last two non Italian Popes. Adrian VI was from Netherlands of German ancestry. John Paul II born Karol Wojtyla was from Poland.

Addendum: Jay Srinivas from the QFI group adds on non Italian Popes: Adrian IV or Hadrian IV, born Nicholas Breakspear is the only Englishman who has occupied the papal chair (1154 to 1159).

2. What connects Castel Gandolfo in Italy to the Pope.

Ans: It is the summer residence of the Pope.

3. What was first mentioned in a letter of Pope Clement IV to his nephew in 1265 ?

4. Applicants to this job must be Roman Catholic males of Swiss nationality who have completed basic training with the Swiss military and can obtain certificates of good conduct. Recruits must be between 19 and 30 and at least (5ft 9in) tall. Which job ?

5. What was first created in Ireland for the visit of Pope John Paul II in 1979 ?

The 6 th question: Which organisation has the motto "Nation Shall Speak Peace Unto Nation "